45% of the US blood supply comes from the American Red Cross.

45%, that's a huge amount from a single source.

Blood is collected through donor blood drives. And the blood is then handled or transported by phlebotomists, drivers, RNs, LPNs, technicians (in the lab, product management, and apheresis departments), and one mechanic.

These are front line workers for the collection and processing of blood.

These front line workers set up blood drives all over the country.

When you think of a blood drive, think of the work as equivalent to the set up and break down of an event like a small circus, carnival or maybe a convention.

And these are safe events, or at least intended to be safe events through the regulation of blood as a "drug" but the FDA. Yep, these events are FDA regulated.

The 2003 consent decree settled charges that the Red Cross had committed "persistent and serious violations" of federal blood safety rules dating back 17 years.

So, what does all of this mean?

What all of this means is that BLOOD is BIG BUSINESS. Blood is, as the New York Times noted after the FDA announcement of a $5+million fine:

The Red Cross has struggled for years to get its multi-billion dollar blood business, by far its biggest money-maker, into compliance with federal rules.

Let me repeat that

They make Billions of dollars based on all of our volunteer blood donations.

So, the Red Cross makes billions and billions on supplying 45% of the nation's blood, but is now fighting unions representing front line blood drive event workers. These are the same workers who put on these blood drive events, make them safe and then do it all over again at another location. These workers provide reading material, documentation throughout the blood drive, ask health history questions of donors, perform mini physical exams for donors, take blood, care for the donor afterward donation, pack up the blood, break down the event, and bring it back to the lab for processing and testing, only to do it again the next day or week, depending on their schedule.

And the fines? Are they based on the work of the front line workers? The ones primarily handling the blood, well, according to NPR's All Things Considered, not so much, it is a "management problem".

So, we have a multi-billion dollar business, management problems, FDA fines, and now, they're crying broke as they sit at bargaining tables with 9 different unions as they negotiate front line worker agreements.

So, the unions got together and told the American Red Cross just what they thought of their anti-union, anti-worker negotiation tactics and I got to meet some of these workers on Friday on E street in Northwest DC. 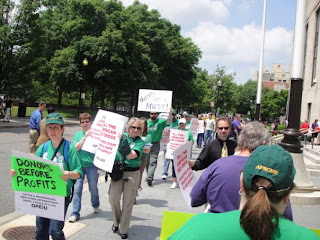 These are the workers who make our blood supply safe, and they have been reduced to marching on Washington for getting what they deserve, a fair negotiation with the American Red Cross.

The request for massive concessions and pay freezes across the board has been covered in a number of local papers, like the New Haven Register who noted something interesting which really got me thinking:

The union claims that the Red Cross is demanding pay cuts for workers, as well as staffing changes that would replace some workers with management representatives.

“They’re not licensed. They’d be making medical decisions, based on what?” asked Crystal Guimaraes, a registered nurse from Naugatuck. She said workers at blood drives need to know what to do in the event of medical complications, physical reactions or seizures.

Would these be the same managers who were at the heart of the fines to the American Red Cross in 2006? Are they part of the "Management Problems" that NPR reported?

And, what about the response from the American Red Cross:

In a statement released Friday, Donna M. Morrissey, spokeswoman for American Red Cross Blood Services Northeast Division, said the Red Cross blood supply “has never been safer, and the American Red Cross is committed to the health and safety of every blood donor who volunteers to roll up their sleeve and every patient who receives blood.”

Morrissey said the pay and benefits package offered to union members is “consistent” with pay and benefits provided to nonunion employees. The Red Cross also has frozen salaries for nonunion workers for the next year and made changes to its retirement programs for all staff.

What I notice in this comment is something big that's been in the news lately and was oddly unaddressed:

Incentive pay sounds like a bonus to me, and this is only at a volunteer recruiter level. What about higher levels like the CEO level (which has been a virtual revolving door since Bernadine Healy left in 2001) or directors and regional levels? And for an organization with more than 30 CEO's, can you imagine the kind of money we're talking about when we're talking about a multi-billion dollar business?

Take the Director of Collections in Connecticut who received a sizable un-reported bonus (the size is unknown because it's not being reported by the American Red Cross and is not being provided to the unions during the negotiations). And why would this blood collections director receive a huge incentive? Well, it's for introducing the MCS machines to the region.

I suppose I'm way more concerned today than say a year ago about how big companies hide their payments to employees. After the issues with AIG bonuses and all the banks that got money from the government for sinking their companies, well, would you really blame me for being suspicious?

If in 2005, when the Red Cross was going through turmoil due to their response to Katrina, they were also handing out retention bonuses of $100k to some of their top executives, and these are only reported on the top 5 paid non officers. If during turmoil they were handing out this kind of money, what are they doing now? 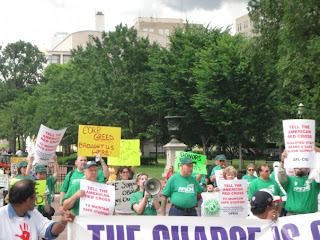 Clearly, what they're doing now is trying to get out of negotiating with people like Christine Holschlag (she's the one with the mega phone). And for a Congressionally chartered non-profit like the American Red Cross, that's just not acceptable.

The American Red Cross does answer to a higher power, they answer to all of us donors. We make it possible for you to make volunteer blood donation into a MULTI-BILLION DOLLAR business. It's time for them to negotiate in good faith with the unions representing the folks who make our blood supply safe. Until they do, they won't be getting checks from me or my blood. I'm just not comfortable with the American Red Cross profiting on the backs of folks making our blood supply safe. It's time for them to do the right by workers and not so much their CEO's.

American Red Cross, I think you can put down the AIG play book now, don't you?