HR 915 Could Put An End to FedEx Misclassification Practices, Finally 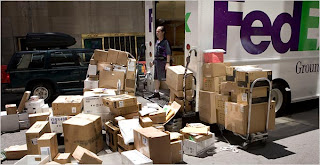 For a long time on UnionReview.com and other pro-labor sites we have talked about the misclassification of workers. We go into the plight of independent contractors frequently and, I believe, we explain that stuff fairly well.

There is another big misclassification -- and that is when workers are wrongly covered under the Railway Labor Act as opposed to the National Labor Relations Act. This exact misclassification has gone on at FedEx for a very long time.

The misclassification makes it very difficult for many of FedEx employees to organize a union. When workers under the RLA want to form a union they must do so by "class and craft" which casts a wide net of job duties and job titles into the whole group. In addition, the RLA requires organizing a union on a nation-wide basis for ALL of the workers that are pushed into this net of "class and craft." In other words, you cannot organize one work group at a time. In other other words, if the workers are ready in New York City but not in Atlanta, the guys in NYC don't get a union, and vice versa.

I recently learned about something called the FAA Reauthorization Bill. I thought to share some of this with UnionReview.com readers because, for one, I think it is important to know what is taking place on the Hill, but also to give you all the heads up that we are going to hear a lot about this, hopefully, in the coming weeks and months as it addresses this very issue that is happening with FedEx workers.

On February 9th te FAA Reauthorization Bill was introduced by the chairmen of the House Committee on Transportation and Infrastructure and the Subcommittee on Aviation. HR 915 says, "Labor: Express Carrier Employee protection: Amernds the Railway Labor Act (RLA) to clarify that employees of an "express carrier" shall only be covered by the RLA if they are employed in a position that is eligible for certification under FAA's rules, such as mechanics or pilots, and they are actually performing that type of work for the express carrier. All other express carrier employees would be governed by the National Labor Relations Act."

As history goes, FedEx Express viewed this deletion of the term "Express Carrier" as a threat to the company's ability to hide and insulate its workforce -- under the RLA. Though the ICC looks at FedEx as a motor carrier, FedEx, which clearly has nothing to do with rail travel or rail cargo (what the RLA is for), finds itself in the union busting position of having hidden beneath legislation.

Finally, on October 12, 1996 the NY Times published an article called "How FedEx Did It." Here is an excerpt of that piece, which I am including because I think it sums up the historical situation the best:

"As the Senate rushed to adjournment earlier this month, one odd and seemingly inconsequential item stood in the way: the insertion of a few words in a 1923 law regulating railway express companies.

"It was not the kind of thing that would ordinarily seize the attention of senators eager to go home barely a month before Election Day. But they stayed in session until the language was enacted, because the beneficiary of the arcane language was Federal Express Corporation, which has become one of the most formidable and successful corporate lobbies in the capital.

"Federal Express wanted the language change because it might exempt it from the National Labr Relations Act and, as a result, help it resist efforts by unions to organize its workers. Despite passionate speeches by opponents on behalf of organized labor, the company was able to engineer a remarkable legislative victory, prevailing upon the Senate to remain in session two extra days solely to defeat a filibuster by its opponents."

As mentioned before, those days might be coming to an end.

Though I have not seen any online take action liinks set up for this, yet, you can still write your representatives and tell them why it is important to you, as a worker, to have this archaic language removed from law so that companies like FedEx cannot continue union busting for another generation.

I always find it interesting to read biased blogs and how they spin the truth. Your comment, "FedEx, which clearly has nothing to do with rail travel or rail cargo (what the RLA is for)" is great spin. I'm certain that you know the RLA also covers airlines, but you chose to leave out that little tidbit, as it would hurt your argument. FedEx started as an airline and is still legally licensed as an airline. While I'm neutral on the union subject, I'll give you credit for your skill in misleading your readers.