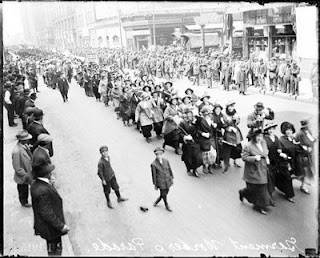 A good friend and fellow labor activist wrote this piece for UnionReview.com. I asked her if we can cross-post her article to Joe's site, and she said, "Of course," enjoy!

They say that those who aren’t angry simply aren’t paying attention. When it comes to anger over the country’s financial meltdown, however, not paying attention is becoming less of an option, thanks, in part, to a group of renegade workers from Chicago who have taken matters into their own hands.

In the midst of a financial crisis and government-backed bail outs to save Wall Street, big business and fat-cat CEOs, workers in Chicago are taking a stand.

As reported by CNN.com, 200 members from the United Electrical, Radio and Machine Workers of America have joined together in a peaceful protest that is making headlines and causing some of the country’s most powerful to take notice.

Now, the workers are staging a sit-in, saying they won’t leave until they get what is rightfully theirs: severance packages and accrued vacation pay.

Among those to show support for the group include the Civil Rights leader Jesse Jackson, President-elect Barack Obama and Illinois governor Rod Blagojevich, who recently issued an order for the state government to suspend doing business with Bank of America.

“We are going to do everything possible here in Illinois to side with these workers,” Blagojevich said. “And it isn't just lending them moral support, but it's putting pressure on financial institutions like the Bank of America.”

Earlier in the year, Bank of America received a $25 billion tax-payer bailout package which corporate CEOs claimed would save the jobs of working men and women; it’s more and more clear, however, who the bailout really bailed out—and the employees of Republic Windows and Doors are making it harder and harder to forget.