More than 11,000 School Bus and Transit Workers Join the Teamsters in Less Than Two Years! 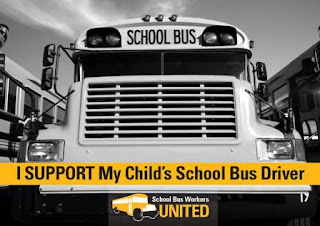 In just under two years since the Teamsters Union began its intense campaign to organize school bus and transit workers aroung the country, the Union announced this week that it has hit the 11,700 worker mark!

The most recent victory was in Olathe, Kansa as another 228 workers became Teamster members.

As this campaign rolls along, it is so critical for folks to realize that this union is organizing, and winning, in places where "union" is shunned ... places like rural Mississippi -- where three yards organized in the last month; and Jacksonville, Florida where more than 900 workers overwhelmingly chose the Union in that election earlier this year.

Below is the full release put out by the Union:
The energy in Olathe, Kansas is high today as school bus drivers and mechanics with First Student celebrate their vote in favor of representation by the Teamsters Union. The 228 workers are now members of Teamsters Local 838 in Kansas City, Missouri, and part of a larger group of private school bus and transit workers nationwide who are joining the Teamsters at a rapid pace.

“We just want to be able to pay our bills and have fairness at work,” said Deb Spruytte, Alvarez’s coworker. “You do this job because you love it, and we haven’t been loving it lately with all the changes with the company. Becoming Teamsters has brought us together and we’re hopeful for the future.”

“This group worked very hard to make this happen,” said Billy Thompson, President of Local 838. “With help from our local and the International Union, the committee of workers forged ahead and this victory is the result of their efforts. We’re very happy for them and look forward to providing them with strong representation.”