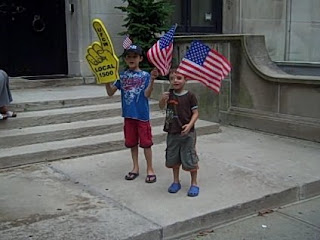 Joe:
It was great, as always, to hang out with you after the Parade; what a day, huh? I wrote up this piece for my site this morning and added the video I took of the Chorus doing Solidarity Today ... I thought to cross-post this for you.

Keep up the amazing work, brother ... this City needs you more than it knows.
-Rich


More than 400 unions and 50,000 workers lined the Big Apple’s storied Fifth Avenue on Saturday in the annual Labor Day Parade.

I came home to the City’s spirited event to work on a piece for Teamster Magazine and some IBT websites.

The parade churned out more than 2,000 Teamster members from around the New York Metropolitan Area, all of whom marched with bands of drummers and bag pipers holding signs of Teamster Pride or Teamsters for Obama gear, yet every union I can possibly think of (and some I never even heard of) had a presence. Signs, T-shirts, hats, music … the union pride was in full force.

While the City was threatened with storms, the first rain drop didn’t land until 20 minutes after the parade ended. The partly sunny and intensely humid day allowed for a great parade where folks had a chance to meet, greet, sing and talk about why they were present. I got some quotes for my Teamster stuff:

“We need to secure our future and the future of the next generation,” one Teamster said, standing with his young children. “We can only do that in this country by way of working union,” he added.

“It is only with Obama that we will see the Employee Free Choice Act, the law all of labor needs right now,” said another Teamster, holding Obama signage.

Senator Hillary Clinton met up with the workers a few hours before the parade procession began at a breakfast meeting.

When Clinton addressed the room of workers and politicians from the City, she did so attacking John McCain.

“I heard nothing that suggests the Republican team even knows how to fix the economy for middle class families, how to provide high-quality, or affordable healthcare for all Americans,” Clinton said.

Some spectators looked on as procession after procession marched with union colors, music and chanting. One unmistakable spectator kept applauding each union, screaming, “Thank you” as the workers walked on.

A block party began as the parade came to a close. Members from all unions came together for burgers, franks and soft drinks. Conversation and laughter among old and new friends filled the streets until the NY Labor Chorus took the make-shift stage set up outside of a Lathers union hall. This video is of their last number in their set, “Solidarity Forever.”

One worker watching the singers wore a T-shirt from one union (I think Steamfitters), a hat from another – and held a huge sign that read, “Teamsters For Obama.” I thought, hmmm … there are others who are just out to support labor, that’s a breath of fresh air!

On the personal front – it was awesome to see and hang out with Joe from www.joesunionreview.com, his wonderful girlfriend, Bill the Lather, Bill T. from Teamster Local 807 – and other friends I don’t get to see all that frequently. I wish you all could have been here with us.