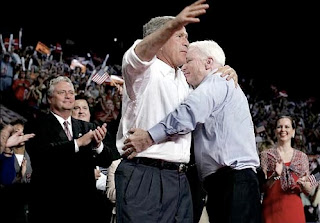 It has been just about six months since I left Florida for DC -- and damn if I wasn't pleased to hear that Florida union members and retirees came together to protest a fund raiser for John McCain.

The web presence for ABC-10 out of Miami (my old employer) reported today about the protest:

The Fort Lauderdale chapter of the American Federation of Labor and Congress of Industrial Organizations is calling on McCain to abandon his proposed health care plan, which they claim will saddle working families with an additional tax, give insurance company's more control of people's health care and do nothing to expand coverage to the uninsured.

And they are right ... McCain in office would do absolutely zero for working people. Here are some interesting points for any working person even remotely considering a vote for John McCain:

1. Senator McCain's proposals to help our country are severely stuck in the past. McCain's prescription to treat our ailing economy is standing by the job-draining North American Free Trade Agreement, and adopting Bush's failed policies.

2. Both McCain and Bush support anti-union laws that make it harder for workers to unionize. They want to privatize Social Security. They have no meaningful plan to deal with our country's health care crisis at all. And they dismiss the good-paying manufacturing jobs we lost due to NAFTA with no plans to replace them.

3. Since Bush took office, it is a matter of fact that we are working harder for less, but some 2 million more of us are out of work and 11 million more lack health care insurance. We have had a slow wage growth, skyrocketing costs for gasoline and health insurance, and four straight months of job losses. Foreclosure is a looming possibility for millions of families.

To balance that all out, here are some reasons I am voting for Barack Obama and urge you to do so as well:

2. Obama has gone on record about his readiness to fight for better wages, real health care reform, stronger retirement security , fair trade and an end to the outsourcing of good jobs.

3. Based on his Obama's record, I believe that he fully understands the struggles of everyday working Americans ... and it is time there is someone in Office who possesses that understanding.