Hit the pocket books of working families, Schwarzenegger gearing up to hurt working class and retirees 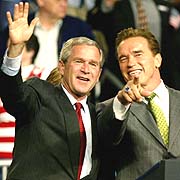 "Every day I care for a blind man and a woman with mental disabilities. They're able to live alone, somewhat independently, with my help. Both my consumers would be doomed without services," "They would both be devastated if they were forced into nursing homes because of these cuts." -Rosie Byers, homecare worker in San Francisco.

You work all your life to retire and along the way you and your wife get sick, but you can make it in your own home with a little help, lord knows that my own mother needed home help when she was dying. In San Fransisco, CA., the budget cuts are being aimed at working families and retired, sick and those in need. Cutting jobs and reducing hours, wages and benefits for those that make the cut potentially hurts all San Fransisco residents.

The title translated is California above all others, it was written at a time when California had another pro-corporate Governor, Peter Wilson. While the names have changed, as have the times, the message is the same, sing along...

"At a time when AIDS is in a crisis,
I cut healthcare and I raise prices,
sales tax, snack tax, excise tax
Informational tax with a newspaper tax.

Hit the pocket books of working families,
increase tuition at the universities,
Some day I'll command all o' you,
even your kids are gonna pray to me in school,
Soon I'm gonna be the president
you might remember the last one this state sent"

I wish I heard this when it came out...the studio version is awesome

Names changed, story is the same, maybe even worse.

The Man behind the music

So who is the front man of this work?

Michael Franti, who continues his career as musician and movie maker, now with the band Spearhead, heres a live show from 2006: