We start with a story that Omaha Steve pointed out in the Labor section at Democratic Underground, it seems that Rick Berman's firm has launched a new nationwide ad campaign against unions and the Employee Free Choice Act.


The ads depict workers talking about how unions take away their rights and bully people into joining unions.

"What the ads play on is a sense that, 'I'm not gonna win, I should keep my head down and I can't make a difference, because somebody out there is going to beat me down,'" McKay said. "That's exactly the problem unions see."

The next story is by Donald P. Russo, a labor attorney from Bethlehem, PA

Big business and the Republican Party have done a remarkable job of convincing young people that unions are bad. The propaganda campaign has been a remarkable success. Young people working at low-wage, part-time jobs, with no health insurance, paid sick leave, paid vacation or pension benefits actually think that they are doing well and that it would be a bad thing to bring in a union. As an employment attorney, I am seeing situations that are slowly bringing me to the realization that ''union busting'' is now a full-time pursuit in the workplace. What is most disconcerting, however, is the split I am observing among liberal Democrats.

The corporate media mouthpiece Bloomberg may say the nation’s economy is “stalling” in the wake of today’s announcement that the jump in the U.S. unemployment rate is the worst in more than two decades, but working Americans know the real word for it: Disaster.

Jobs fell by 49,000 after a 28,000 drop in April, according to the U.S. Department of Labor. The unemployment rate increased to 5.5 percent, the fifth straight month in a row that jobs decreased.

Source: Department of Labor. Prepared by the Staff of the Committee on Ways and Means, 5 June 2008. 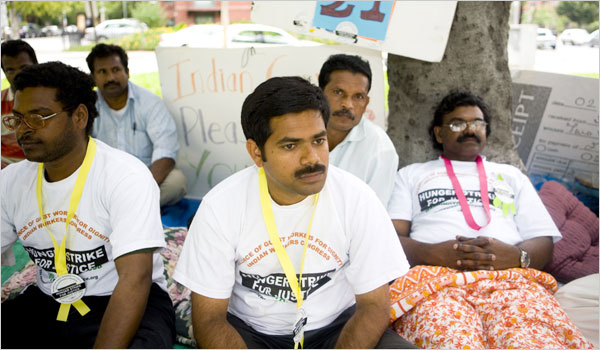 Brendan Hoffman for The New York Times
Reji Davis, center, and other workers from India on a hunger strike on Embassy Row in Washington. They say they were promised permanent residency.

“I sold my home to raise that money,” said Mr. Pazhambalakode, 43, who is one of the protesters and has a wife and child. “I can’t go home empty-handed because of that great debt.”

Meanwhile, on the Gulf Coast, Signal was seeking skilled workers, overwhelmed with orders for repairs on oil rigs battered by Katrina.

“We were on our knees,” Mr. Marler said, “and we wanted to contribute to turning the Coast around. We were approached by these labor providers, and we jumped at the chance.”

Maybe a phone call to The United Association would have been a better idea, Mr. Marler. Fpr more info on this topic and a few other related articles here at Joe's Union Review, check out the links below, maybe the Times has a spot for me.
Richard at Union Review points an article at Forbes, which shows how the corp's are in fear of a rise in union membership.

Forbes is running a piece today called "Fears Of A Union Renaissance." In the article they menion that the US Chamber of Commerce is fearful of a potential union resurgence in the United States.

The article says, "Now the group, which represents business interests, is opposing a laundry list of bills fluttering about Capitol Hill, which the chamber says would make it easier to organize a union, expand worker benefits at the expense of employers and lift the caps on punitive damages sought by employees in lawsuits."

They are referring to the Employee Free Choice Act.

You can see more about their tactics in the first link I posted above, and heres another tactic, illegally firing organizers and union sympathizers...

Starbucks' pretext for the illegal anti-union firing was that Dorsey was guilty of some months-old attendance infractions.

"Today I joined the growing number of baristas that Starbucks has fired in its relentless union-busting campaign," said Cole Dorsey. "Starbucks' disrespect for the right to join a union is appalling and absolutely will not stop our efforts to have a voice at work."

Starbucks, I like the coffee and the way they have legal workers in their stores and the fact that their is organizing drives and some union workers, I'm hoping they will have all union stores one day, heres some more Starbucks info at this site, speaking of this site, I got a nice plug from a fellow labor blogger

If you haven’t checked out the site please do so. The blog is proudly pro-union, despite the strange site address, and covers everything from organizing drives to music to an unbelievable list of labor links that I was shocked to find myself on!

He's talking about us here at Joe's Union Review, I'm very proud to have been noticed, I urge my readers to check out the stories there as most are labor related, with social and political issues and some music thrown in. No shock needed, Far Left Field's 3rd article, well over a year and a half ago was about the Employee Free Choice Act, and continues to this day bringing forth labor news and views such as last Fridays "Investing In Workers". Hers some more news

Laborers Local 274 in Indiana, gets new deal after 3 years without pay raise and strike

The laborers asked contractors for more money and better benefits. Union leaders said they just reached an agreement for a new contract and will not be picketing on Friday.

Thursday morning, picketers were outside Wilhelm Construction in Indianapolis, one of Central Indiana's largest contractors. Laborers also picketed in Lafayette, Terre Haute, and Bloomington too.

Seems they didn't feel like writing much, so heres a bit more from some previous stories

Other building trades are showing support by stopping work on the job sites. Local 274 President Jim Terry said several union contractors who are not part of the Indiana Construction Association have signed an interim agreement with the union.

That temporary agreement will allow work to continue on some construction projects.

Union members said they have not had a new contract in three years and hope an agreement will be reached soon. "In the three years, we haven't had a cost of living increase," Steve Foltz said. "And we're just trying to catch up with the other trades. We're trying to get this settled, hopefully before the end ofthe week. It's just a security thing, a few extra cents to the hour."

even when they report about it, they seem to get it wrong, they have had a contract, which expired on May 31st., they have not had a raise in 3 years

Indiana State University's new recreation center is supposed to open in 2009, but a dispute between the Laborers International Union of North America Local No. 204, and Hannig Construction could change that if the two don't come to an agreement on a new contract, which ended May 31.

"You would think that the contractors would have enough respect for the people who work on their projects, when they know that they have not had a pay increase in over three years," said Charlie Toth, Business Manager for Local 204.

Theres some more news out there, check out the headlines over at these blogs and sites