Teamsters Local 237 was outside City Hall today on the Broadway side of the park. They had a nice sized rally with a great band to get the rhythm going. The issue at hand is the massive amount of cuts that the Bush Administration has handed the NYCHA and the hundreds of layoffs within the city agency. That dismantling of public housing in New York City is a serious detriment to those that can not afford the rents of five borough. Obviously George Bush doesn't care, but these spirited Teamsters do. 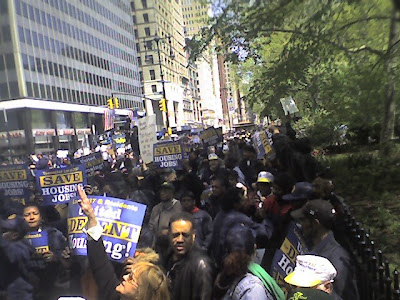 Thanks Joe for helping me set up my blog. That was easy and you were a delight to work with.