Take a look at the Men’s Wearhouse workers who will lose their job.

Update to->Montreal, Ca : Men's Waerhouse closing factory for higher profits and turning it's back on 600 workers, tell the CEO how you feel (3/17/08)

From the link above:

Continuing the displacement of good jobs here in North America to countries of lower labor standards, Men's Wearhouse, who also owns Canadian retail chain Moores and had a reported revenue of $1.9 billion last year, is closing it's factory in Montreal in order to "remain competitive” in the words of CEO George Zimmer. You can tell Mr. Zimmer how disgusted you are thanks to a E-Action campaign sponsored by UNITE-HERE, which can be found at Tell George Zimmer: Our Jobs Matter!

Now the union representing these worker has created a new blog site, which among other things, lets you 'get to know' the workers who will be displaced, this is another in a long line of travesties which have occured since the inception of "Free Trade" and "Global" economy.

The North American industry that has helped workers to have a career is not only going South, it's going to the lowest possible labor standard nations. When does this madness end? We are now bowing down to conditions of third world nations. Heres some clippings from the new Blog site Our Job's Matter

This March, Men’s Wearhouse announced that it is shutting down a factory with highly-skilled, productive workers to move its production overseas - even though the company has seen its profits rise each year. By moving its clothing production to countries where low pay is the norm, we suspect that Men’s Wearhouse executives think that they can cut their costs and pocket larger profits at the cost of the jobs and futures of the 600 employees who make the suits here in North America.

Golden Brand factory was founded in 1961 in Montreal. Since then, workers at the factory have been making quality suits, helping to build the reputation of Moores Clothing for Men and its parent company, Men’s Wearhouse. Among these workers you will find 21 different nationalities, single mothers, and generations of family members working together. For many of these workers, Golden Brand is like a second home. To meet some of these workers and hear their stories, check out our Worker Stories below. 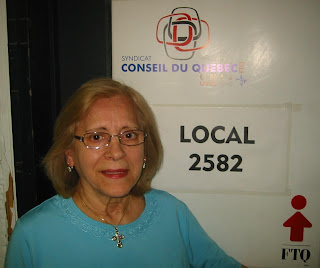 Vicky immigrated to from Romania and has sponsored many of her family members to come to . She makes the pockets you see on the suits you wear.

The announcement of the closure is very painful for her.
“I would give anything to support the people here. We came here as immigrants looking to make a better living and we gave so much to this company – now look what’s happening.”

Vicky wants to keep this factory open and is willing to fight with her brothers and sisters at Golden Brand. “If one door is closed, there is an open window elsewhere. When there is a will, there is a way!” 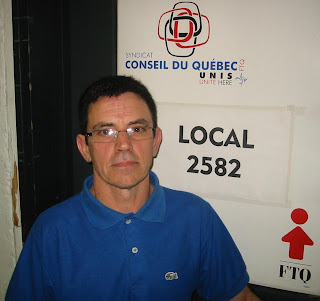 Manuel has been working at Golden Brand for the last 6 years, but he has worked in the garment manufacturing industry for over 30 years.

His Portuguese roots represent one of the 21 nationalities working in this factory and he himself can carry on a conversation in at least 4 languages. Manuel is not interested in finding a job in another industry. “This industry is my background. I love the work I do.”

Since the announcement of the planned closure, Manuel is motivating his brothers and sisters at Golden Brand to stay strong. “Our lives and our work should never be sacrificed for imports and greater profit. It is through our work that we gain our dignity and create our path as active citizens. I will do whatever it legally takes to keep Golden Brand Open!” 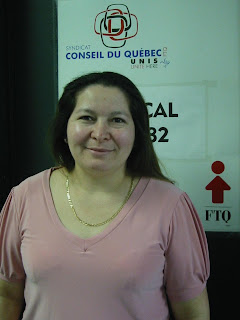 Claudia is 39 years old and has worked at Golden Brand for 20 years – more than half of her life. Born in El Salvador, Claudia came to Montreal to escape civil war in her homeland and to seek better opportunities for herself and her family. She has two children whom she supports with her job.

“It hurts to hear this news,” says Claudia. “To be kicked out after giving twenty years to this company – it’s very hard. An American company has come in and is doing whatever it wants to make money. Without good jobs like these, how will we take care of our children and give them the opportunities and education that we didn’t have? We will do whatever we can to keep this place open.”

Check out the site and and don't forget to Tell George Zimmer: Our Jobs Matter!