A few hours ago at the building being constructed at 301 East 51st. street, while workers were preforming a tower crane jump, something went terribly wrong. My heart goes out to the families affected by this tragic event. 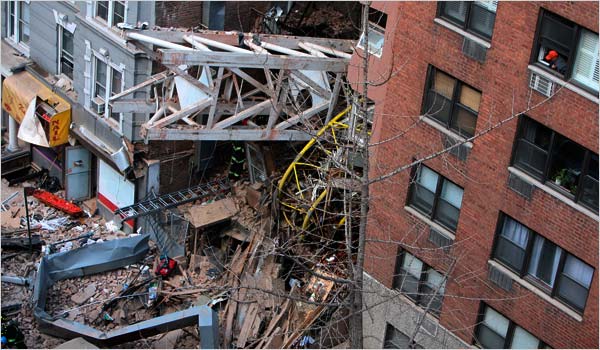 A large crane at a construction site on Manhattan’s East Side collapsed Saturday afternoon, killing at least four people, officials at the scene said

The big, white crane, which looked to be about 20 stories tall, appeared to have toppled across a street and crashed into other nearby buildings.

The accident happened at 303 East 51st Street, near Second Avenue about 2:20 p.m., the authorities said.

Aides to the Manhattan borough president, Scott Stringer, said they had been told by the Office of Emergency Management that the crane fell on two buildings, destroying one at 305 East 50th Street and partly collapsing 301 East 50th Street.

People were believed to be trapped in the rubble.

“This is an absolute disgrace,” Mr. Stringer said. “We need better inspection and more resources.”

There are at least nine open violations on the construction site for a 44-story condominium building that are “quite serious,” he said.

Ismael Garcia, who was working on the 15th floor of the building under construction, said that just before the crane collapsed, it was lifting material that apparently fell and struck a girder that connected the crane to the building.

“Out of the corner of my eye, I saw a piece falling,” he said.

There was a loud crash, and he rushed to the edge of the building to peer out over the street below. “I saw a guy laying on the roof there,” he said, looking down on a building below. “His head was under the debris.”

Stephen Kaplan, an owner of the Reliance Construction Group, which manages the condominium construction site told The Associated Press. said the crane had been scheduled to be raised on Saturday so work could begin on higher stories of the building.

He said a piece of steel fell, shearing one of the ties holding the crane to the building. “It was an absolute freak accident,” Mr. Kaplan told The A.P. “All the piece of steel had to do was fall slightly left or right, and nothing would have happened.”

Mr. Kaplan said his company had subcontracted the work to different companies and was not in charge of the crane.

Bartle Bull, who has lived in the neighborhood for 30 years, said he was not surprised that the crane had fallen. “What I’ve seen for the last two months is reckless construction and lack of enforcement,” he said. “We have said this crane is going to come down.”

Mr. Bull said he deliberately avoided walking along 51st Street “because this thing looks so dangerous.”

He said he had been watching the Yankees game in a restaurant when the accident happened. “We heard this incredible explosion, someone opened the door and the dust came in,” he said.

John PlaGreco, who owns Fubar, located in the building that was crushed, told The A.P. that be believed one of his employees was in the rubble.

“Our bar is done,” he said. “The crane crashed the whole building. If I wasn’t watching a Yankees game, I would’ve come to work early and gotten killed.”

The streets around the collapse site were filled with dirt and debris, with at least one car turned over by the force of the structure’s fall.

Alfonso Quiroz, a spokesman for Con Edison, said the company had turned off the gas to at least six buildings in the area as a precaution.

“As a precaution we do that often when something like this happens in cooperation with the fire department and the police department to make the area safe,” Mr. Quiroz said.

A crane mounted to the side of a skyscraper under construction toppled with a roar Saturday, smashing into a block of apartment buildings, killing at least four people and setting off a scramble for survivors in the rubble.

The crane split into pieces as it fell, pulverizing a four-story brownstone and demolishing parts of three other buildings.

Mayor Michael Bloomberg said at least four people, believed to be construction workers, have died and at least 10 people were injured in one of the city's worst construction accidents in recent memory.

"It is a tragic event," Bloomberg said.

The collapse created a virtual war zone on an affluent block on Manhattan's East Side: Cars were overturned and crushed. A huge dust cloud rose over the neighborhood. Rubble was piled several stories high.

An intensive rescue operation was under way to find anyone possibly trapped. One man was pulled from a collapsed townhouse 3 1/2 hours after the building was crushed.

Fire Commissioner Nicholas Scoppetta said the rescue was "a painstaking hand operation, as we try to remove the rubble so we don't cause further collpase or injure anyone who may still be in that building." He said the operation would continue all night if necessary, including the use of search dogs and thermal-imaging and listening devices.

John PlaGreco, who owns Fu Bar in the crushed building, said he feared one of his employees was dead inside.

"Our bar is done," he said. "The crane crashed the whole building. If I wasn't watching a Yankees game, I would've come to work early and gotten killed."

About 19 of the planned 44-story condominium had been erected, and the crane was scheduled to be extended Saturday so workers could start work on a fresh story, said an owner of the company that manages the construction site.

A piece of steel fell and sheared off one of the ties holding it to the building, causing it to detach and topple, said Stephen Kaplan, an owner of the Reliance Construction Group.

"It was an absolute freak accident," Kaplan said. "All the piece of steel had to do was fall slightly left or right, and nothing would have happened."

Kaplan said the company had subcontracted the work to different companies and was not in charge of the crane. He wasn't sure whether any workers at the site were among those killed.

Neighborhood residents said they had complained to the city several times about the construction at the site, saying crews worked illegal hours and the building was going up too fast.

City Building Department records showed that on March 4, a caller told officials that the upper portions of the crane appeared to lack the proper number of safety ties attaching it to the building.

A city inspector visited the site and determined on March 6 that no violation was warranted.

Another call questioning the crane's safety was dismissed as unwarranted by another inspector in February.

On Saturday, nearby residents reported hearing a terrible roar as the structure detached from the condominium.

"First I heard a rumble, and it increased, and then it increased," said Bill Reilly, who lives a block away. "It continued building in strength until there was a final vroom! It shook the six-story brick building that I live in."

Witnesses reported a strong smell of gas in the area on 51st Street near 2nd Avenue. Gas utility Consolidated Edison said it shut off service to area buildings.

Ben Galati, 54, said he was in the basement of a high-rise apartment building across the street where he is a doorman.

"I heard a rumble outside. I said 'Let's get out of here!' And then the crane came down. A split second later, I heard an explosion," he said.

Most recent news from Google

Construction crane collapse accidents have become almost epidemic, and it's largely due to inadequate regulations and controls. These aren't "accidents" in the sense that they just happen. Rather, they are very likely to happen given the poor regulatory system. I've written articles on construction crane accidents which might shed some light on this growing problem to construction workers and to general public safety.