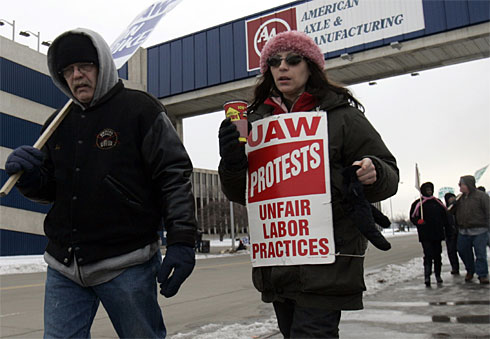 That's the sentiment from many GM workers as the strike at supplier American Axle & Manufacturing begins its third week, despite the fact that the strike has forced General Motors (GM) to shut down or cut production at 29 U.S. plants.

The moves, which have most affected production of full-size pickups and SUVs, involve plants that employ more than 37,000 hourly and 4,600 salaried workers.

Several GM workers and their family members said they're glad American Axle workers are standing up for themselves and the working class.

"I was surprised — but pleasantly surprised — that (American Axle workers) actually decided to resist the proposed contract," said Stacey Kemp, 49, a GM retiree whose husband has been laid off due to the strike.

Perhaps if the United Auto Workers had stood up against GM's proposals in the fall, Kemp said, American Axle workers wouldn't need to be on strike.

She and others said that the labor contracts the UAW negotiated with the Detroit automakers last summer have led to the wage and benefits cuts that American Axle management is seeking, and that the fallout from those contracts serves as a cautionary tale for workers at Detroit's auto suppliers.

The GM workers' support came as American Axle talks appeared to stumble on Monday. United Auto Workers President Ron Gettelfinger said Tuesday that there was no movement toward a settlement.

GM Chairman and CEO Rick Wagoner said Tuesday in Washington that the strike was "not a huge issue" because GM has ample supply of trucks in dealer lots. The strike came just as sales of full-size pickups and SUVs were slowing in a weak economy, he said at a breakfast held by the Christian Science Monitor.

"We are losing some production, for sure, but at this point, the impact on retail sales has been negligible because of the inventories and the rather weak market," he said. Wagoner added that while the strike will hurt GM's first-quarter results, "as far as the business goes, it's not really affected us a lot."

American Axle workers walked out Feb. 26, protesting the proposals to cut wages, raise health care costs and freeze pension benefits. The proposed wage, $11.50 and $14.50 an hour, is close to the second-tier wage agreed upon with Detroit automakers last fall.

After a two-day strike in September, GM and the UAW reached a labor contract that lets GM compensate a second tier of newly hired workers with a lesser benefits plan and wages of $14 to $16.23 per hour, or about half the rate of current assembly workers.

In that contract negotiation, the UAW won some U.S. job commitments from GM, and GM promised to hire some temporary workers and in-source some jobs that have been done by suppliers. But shortly after the contract was ratified, GM announced layoffs and let go of temporary workers, leading some workers to feel that they'd been duped.

GM workers said they believe workers at suppliers have learned from those events to get stronger commitments before agreeing to contract concessions.

"I commend the American Axle workers for walking the picket line," said Kathy Ray, a GM worker at Powertrain Toledo, which has had layoffs brought by the strike. "We should have been out on the line like that. … Once the suppliers saw the UAW buckle at GM, Ford Motor (F) and Chrysler, these little companies said: 'Well, we've got to cut, too.' "

Sam Williams, 45, who works at GM's Lansing Delta Township plant in Michigan, said he hopes American Axle workers can protect their wages and win job guarantees that carry over to other auto suppliers.

"The middle class cannot take any more beating," he said. "People cannot live on these wages."

GM, American Axle's parent until 1994, is still its largest customer. Chrysler, American Axle's second-largest customer, said it could continue to operate SUV and pickup plants in Newark, Del., and Saltillo, Mexico, for about another week. The plants have continued running, in part because American Axle has moved work to a plant in Mexico, Chrysler spokeswoman Michele Tinson said.