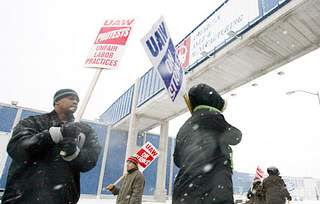 When strikes are called, they are the last resort for the union and workers. It usually means that the companies are pushing for things the workers just can't accept. In the case of American Axle, this strike is a problem for this country, not just these workers, but nothing has been heard from these candidates.

American axle is asking its HOURLY workforce to take up to a 60% pay cut but won't talk about management and executive salaries and perks.

On Feb. 26, 3,650 UAW members at American Axle went on strike after negotiations on a new contract collapsed. The company is seeking to cut wages and benefits in half, saying it needs to cut labor costs to compete with other suppliers that have won concessions from their unions.

The UAW, which has said it needs more data to substantiate those demands, argues the cuts are too steep for a company that is not in bankruptcy and made a profit last year.

I asking everyone to help here because we've become so consumed with the current primary that we're missing the kind of impact this strike is having on these workers and our economy.

Again, from the freepress:

As companies draw closer to the end of the first quarter, a Wall Street analyst warned that he expects the strike to take a toll on profits. Earlier this week, Deutsche Bank auto analyst Rod Lache cut first-quarter earnings estimates for GM, American Axle, Lear Corp. and Magna International Inc. because of the strike.

"There is concern that the prolonged shutdown could cause significant distress amongst smaller suppliers, ultimately translating to additional costs for tier 1 suppliers and automakers," Lache said in a note to investors Wednesday.

The affects on GM:are very serious:

So far, the strike has forced GM to cut production or shut 29 factories. That number is expected to rise to 30 by Monday.

This strike has affected their suppliers as well as GM and that means, it is affecting other communities outside of the striking facilities from the Adrian Daily Telegram

ADRIAN — The strike at Detroit-based American Axle & Manufacturing Inc. has entered its fourth week, and its impact has extended to some local companies.

Inteva Products LLC in Adrian, which is the former Delphi Interiors and Closures facility, and Hi-Lex Controls Inc. in Hudson are among companies affected as a result of the strike that started Feb. 26 after American Axle failed to reach a contract agreement with the United Auto Workers union on economic issues.

This is a HUGE ISSUE and we aren't discussing these families, these cities, these companies, we aren't asking any of the three candidates to even address these issues and we certainly aren't putting pressure on Dick E Dauch or his son, an executive with American Axle, Dick F Dauch, to fairly negotiate with the UAW.

So, today, I'm begging each of you to take a minute and do something, I'm asking you to:


1. contact the campaigns of Clinton, McCain, and Obama
2. ask them where they stand on the American Axle strike and
3. ask them what they're going to do about it.

When you've done that, let the strikers know by contacting the locals and the region. Your support is more important than you know.