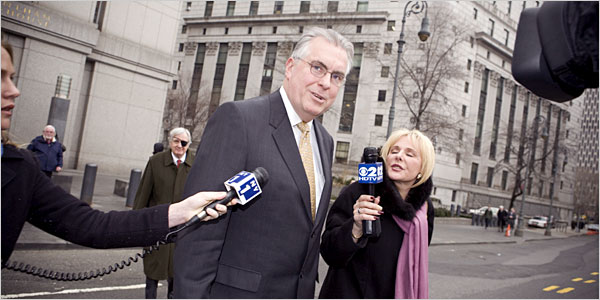 The former head of the nation’s biggest municipal labor council painstakingly detailed years of thievery from his own union and the state on Friday as he pleaded guilty to racketeering charges in federal court in Manhattan.

Standing and facing the judge as he spoke, the defendant, Brian M. McLaughlin, once a seven-term assemblyman from Queens and the leader of a million workers as president of the New York City Central Labor Council, delivered his 45-minute catalog of wrongs in a tone that at times seemed blasé and at other times abjectly cooperative.

But he never, even after the proceeding was over and he was asked to comment, expressed contrition.

“Do you have anything to say to the members?” a reporter asked when it was over, referring to the rank and file he stole from. To that, Mr. McLaughlin, 55, walking toward the elevator, replied, after a slight hesitation and a barely visible wince, “I don’t have any comment right now.”

Earlier, in reciting his crimes — contained in two counts encompassing 21 separate criminal acts — he sounded as if he were reciting a biblical passage about plague and destruction, so repetitive were the verses. The crimes took place from 1995 to 2006.

He said he had sent out letters asking for contributions to benefit members of Local 3, one of the 400 locals under the labor council’s umbrella, and “those contributions were at times used for personal purposes by myself and other members of the group.” Mr. McLaughlin was apparently referring to unnamed co-conspirators referred to in the indictment who were part of the racketeering enterprise.

He said he had “falsely and misleadingly” persuaded people to give personal contributions and government support to a youth athletic association in Queens that he used as a personal piggy bank.

There were two separate checking accounts for the athletic association, one that provided funds to the youth programs and another that “wasn’t necessary to fund the athletic programs,” he said. The proceeds of the second account, he said, “were used by myself and members of my group for personal use.”

He said he also stole money from his Assembly campaign committee, requiring his campaign treasurer to disguise personal expenses as legitimate political ones.

Judge Richard J. Sullivan of United States District Court asked for a “ballpark amount” that he had siphoned from his campaign committee.

“Tens of thousands of dollars?” the judge pressed.

He said he had created no-show jobs within the Central Labor Council and on his Assembly staff, and made it look as if “they had real responsibility and were working real hours.”

In reality, the judge asked, were they giving kickbacks from their salaries to Mr. McLaughlin?

“Yes, your honor,” he replied.

He said he had siphoned money for personal purposes from the William Jefferson Clinton Democratic Club in Queens; solicited the use of automobiles from companies that employed union members; and asked members to perform “favors, errands” and household chores for him, like hanging Christmas lights.

And he had lied on a mortgage application, saying that he was renting his house to a union officer, he said.

The assistant United States attorney on the case, Daniel A. Braun, told the judge that Mr. McLaughlin, who remained free Friday on $250,000 bail, could have to forfeit up to $2.2 million in illicit proceeds, as well as his Long Island home and a car that was paid for with $60,000 in kickbacks from a company that used union members as unpaid labor.

The Central Labor Council released a statement on Friday saying it had made changes to improve accountability within the organization since Mr. McLaughlin’s arrest in October 2006. “That being said, we wish the McLaughlin family well at this difficult time,” the statement said.

The original indictment charged Mr. McLaughlin with illegally obtaining $2.2 million from taxpayers, labor unions and contractors. He pleaded guilty to one count of racketeering and one count of making false statements to a lender.

The judge told him he could be sent to prison for a maximum of 50 years when he is sentenced in September. It is more likely, however, that given his guilty plea, he will be sentenced under federal guidelines to about 8 to 10 years, the judge said.

Ex-city labor leader and Queens assemblyman Brian McLaughlin once touted himself as a potential mayoral candidate. Instead, he'll do his public service in a federal pen.

Under a plea deal with prosecutors, McLaughlin, 55, pled guilty to racketeering in Manhattan federal court this afternoon, agreeing to serve a prison sentence of from 97 to 121 months.

In a plea allocution that took him a solid hour to recount, McLaughlin admitted to having ripped off everyone from his fellow union members to his local little league in Queens. Along the way, he also hit up five street lighting contractors for bribes, and stole from his own political club.

McLaughlin refused comment as he exited the courtroom of U.S. District Judge Richard Sullivan, brushing aside questions from reporters. Asked if he had anything to say to the one million city union members he once led as president of the city's Central Labor Council, McLaughlin declined comment. "I've been advised by my attorney not to talk about it," he said.

The Voice told the ragged tale of McLaughlin's colossal fall in 2006 in "The Sinner Within."