Just starting her career in 2006 as a filmmaker with the now indie cult classic Waitress in which she also directed and co-starred in, Adrienne Shelly's life was cut short at age 40 by an illegal alien construction worker. 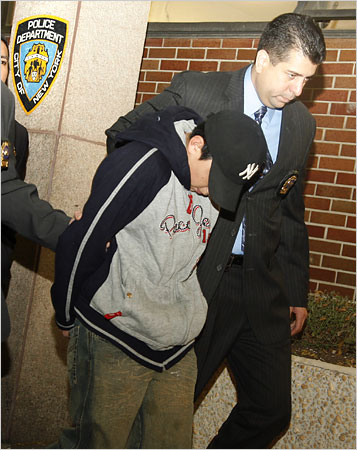 image from NYT
Now if you have been reading this site for a while you already know the impact of the sweatshop construction work force on the cities finances. You already have read about the slave conditions in which their employers keep them under thumb. You understand the pre-1900's conditions in which they must work. You also know that I believe that the enforcement against employers is almost totally ignored.

This unregulated populous is growing by the day and with it is the influx of more who are not coming here just to support their families back home. They are here to make money fast and easy. The powers that be just don't seem to care as long as the countries citizens divide even more on the illegal immigration topic. I personally loathe the idea of making licenses easy to attain, especially the fact that I had to bring my mother with me to get one because I didn't have enough points of identification, and yes i had a student ID, a draft card and a social security card. That still wasn't enough. I don't think that deporting en mass is the correct way to go either.

What I do know is that we have to find a responsible party who is allowing the breach in our border patrolling system. We must then sue them as a class. For unpaid state tax revenue. In construction alone it is estimated according to the Fiscal Policy Institute, that the loss in tax payments to this criminal construction industry in NY is almost 1/2 a billion dollars, thats 1/2 a billion dollars! Thats a lot of Police Officer raises. Damn, the subway could be free if we got that back. Imagine what the estimates would be if it included all industries in New York? We could build an educational skyscraper.

New York State should sue the Federal government.
They should sue for the complete lack of stopping the illegal aliens from getting into the country. If they don't the people of the state should.

In this case of Adrienne Shelly's murder, the contractor who hired the Ecuadorian illegal immigrant should also be tried for aiding and abetting in a murder. Obviously whoever wrote the stories doesn't think that any mention of who the contractor was is of any importance. Of course they don't, who knows maybe they are building in your apartment house, next store or at a local skyscraper in the city. Isn't that a good thought? God, most stories fail to mention that Diego Pillco, the murderer, was an illegal alien from Ecuador. Guess the NY Post is good for something, NOT!

Well heres the story of Adrienne Shelly from The New York Times:

His original confession had the ring of truth: He was an illegal immigrant working on a renovation job in a Greenwich Village building when the imperious woman upstairs confronted him over construction noise.

They argued. She scratched him. Panicked that she would call the police and that he would be deported, he punched her and pushed her to the floor. Mistakenly thinking he had killed her, he hanged her from the shower rod of her bathroom, in a staged suicide.

But in a courtroom on Thursday, the construction worker, Diego Pillco, 20, told a very different story of how he killed the woman, Adrienne Shelly, a filmmaker, on Nov. 1, 2006. Ms. Shelly, who was 40 and the mother of a 3-year-old daughter, had just finished a film, “Waitress,” which opened to warm reviews after her death.

Mr. Pillco, a short, boyish-looking man, speaking softly through a Spanish translator, told a judge in State Supreme Court in Manhattan that the argument had not been over noise, but over a robbery. He told the judge that Ms. Shelly had caught him stealing money from her purse after he had slipped into the apartment at 15 Abingdon Square that she used as an office.

When she picked up the phone to call the police, he said, he grabbed it and covered her mouth as she started to scream.

“When she fell to the floor I saw a sheet and decided to choke her, and that’s what happened,” Mr. Pillco said. The judge, Carol Berkman, prodded him: “And you tied a sheet around her neck and strung her up?” “Yes,” Mr. Pillco replied, “and I made it look as if she committed suicide on her own.” (click for full story)

The big money corporations, the wealthy, the opportunists, are all profiting on the backs of the American born worker and the illegal aliens, they are making our tax money supplement their illegal employees. We, the citizens, are getting double fucked, first by the job we don't get, then by the welfare we grant the illegal alien employers.

I truly was born to late. The American dream is becoming a nightmare. Everything our forefathers fought for, safety conditions, the eight hour day, the weekend, social security, child labor laws, affordable health care, an honest days work for an honest days pay, paid vacation, sick time, the Constitution, our nations sovereignty, the gross national product, the pride in buying union made in the USA, the right to retire securely at an age where you can actually enjoy a bit of life, all of it is now fading away before our eyes. NAFTA seems like it did as it was sold to us, it leveled the playing field between us and Mexico, bringing the Mexican work force upward, the only difference is that the opposite occurred, we are continuously lowering our standard to Mexico's.

I remember when we talked about this issue and that you would be working on the piece. I want to just say that you did a great job reporting/writing and getting this to our attention.

As for the meat of the story ... there is a lot here -- and everything you put forward I totally agree with. We need to get the companies that hire these illegal workers to be held responsible -- and we need to be able to try and punish these workers who commit these heinous crimes -- and that is a concern of mine. You see, I am not sure what exactly can happen to someone illegal. Are they simply deported?

The reason that I think about this as much as I do is because of the Mexican trucking pilot program that I am involved with on the FireMaryPeters.com site. I understand that when an illegal Mexican driver gets into an accident here, they are fined and are then sent back. What then stops the driver to come back in a few weeks in a whole different rig?

This situation where this young construction worker reacted as he did, I believe, needs to have suit against the company that knowingly hired the kid. I am not sure I ever read a story, yet, about a company that was held to any level of accountability.

Thanks for bringing this here.